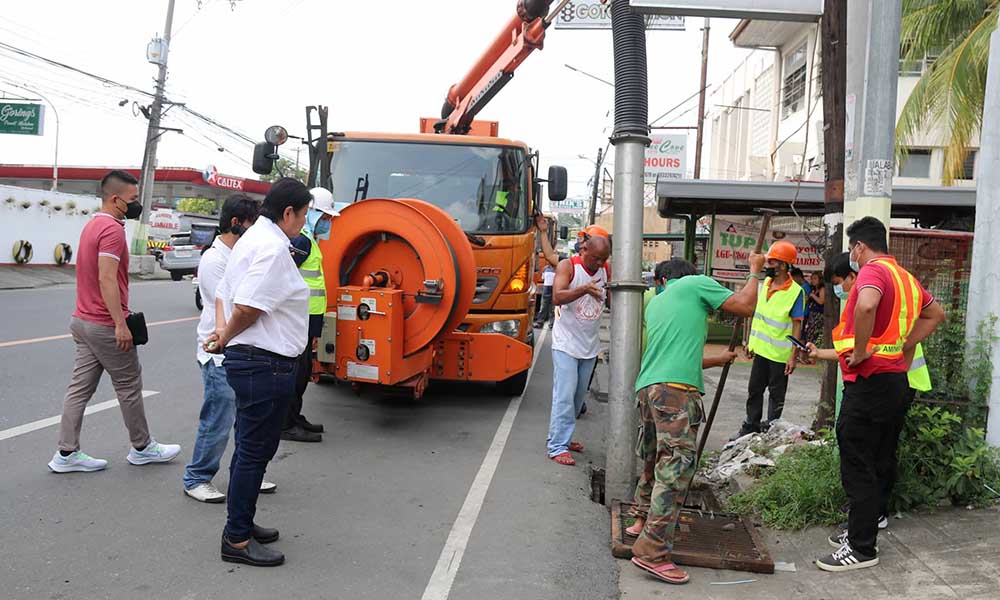 I was overjoyed because last Tuesday, the Vactron machine that we requested from DPWH  arrived and immediately started declogging our drainage canals to mitigate flooding in the city.

This was quite a blessing kasi our own Vactron na hinayaang masira ay hindi pa magamit, like the backhoe na binili natin noon na iniwang sira din at nasa repair shop since January. They’re both being repaired now.

Together with OIC City Engineer Josephine Corpuz, we observed the clearing operations sa street intersection in front of YMCA, one of the areas na madaling bumaha tuwing may high tide.

With the Vactron of the DPWH, and soon with our own Vactron, the clearing of our  drainage canals ay lalong mapapabilis to minimize flooding in the city.

I know that this can be difficult because building infrastructures not only needs billions in  budget outlay but years to build. But we need those plans para ma-resolba ang ating constant flooding.

Sa suggestion ni POSO Chief Arvin Decano to make it easier for jeepney and tricycle drivers in the city to be vaccinated kontra-COVID for the protection of their passengers, we launched the first ever “drive-thru” vaccination noong September 10 sa New Dagupan City Transport Terminal along De Venecia Expressway Extension.

At bilang incentive sa mga nagpabakuna, we gave each one three kilos of rice. And POSO posted stickers of DOH-CHO on their vehicles saying na vaccinated na ang driver of the vehicles for their passengers’ protection.

Actually, noon pa sana nagawa ito ng past city administration pero dinedma ng past administration ang suggestion na ito. It was Dr. Viven Villaflor who suggested to do a ‘drive-thru’ vaccination and he asked me in my then private capacity to help. I readily agreed and offered the family’s terminal for that purpose. But because of politics, the city mayor rejected the idea.

‘Drive- thru’ vaccination had to be done because alam natin na ang mga jeepney at  tricycle drivers cannot easily take time out sa kanilang mga trabaho upang magpabakuna at pumila pa sa City Astrodome. Kaya without leaving their tricycles and jeepney, they got their primary doses or boosters shots.

From there, the Task Force continued clearing the sidewalks hanggang sa palengke.

We recognize the need of our kabaleyans to earn, especially after the pandemic but we have laws to follow, regardless of anyone’s situation.

Last week, I visited Dagupan City National High Schools and other schools in the city to look into their needs especially now that face-to-face classes in all levels have started.

The teachers said they were actually planning to write me a letter to ask me for my help, so we just ended up talking about these right away with OIC City Engineer Josephine Corpuz with me.