THE Calasiao Police Station was ordered closed by Mayor Joseph Bauzon on March 31 for disinfection after its police chief, and 28 other policemen, and one person under PNP custody (PUPC) tested positive for COVID-19 .

A message from Police Lieutenant Colonel Ferdinand de Asis, Calasiao chief of police, “Covid is real”, he said in his message.

De Asis said the 20 policemen stationed in the station, including him, and 9 field training personnel (FTP), and one PUPC tested positive. Results of the contact-tracing were not known at presstime.

They were swabbed on March 25 and the positive results were delivered on March 31.

Despite all of them testing positive, de Asis confirmed they were all asymptomatic. They are all lodged in a temporary treatment and monitoring facility (TTMF).

Temporary receiving areas for operational services have been set up outside the PNP station following strict observance of the minimum public health standards as ordered by Bauzon in his memorandum order.

Meanwhile the streets where these policemen live had been placed under granular lockdown in accordance with an earlier guideline prescribed for such a situation by the Inter-Agency Task Force for Emerging Infectious Diseases (IATF-EID).

A report said the discovery that five policemen were initially found to be positive for COVID-19, it prompted the mass testing of 79 other policemen, which found 21 of them infected while 63 others were found negative.

The 63 are now on duty and are now augmented by a complement of policemen from adjacent police stations.

The five policemen who first contracted the virus were already released from their isolation after turning in negative results in their RT-PCR test as of April 3, said Ocampo. (Ahikam Pasion/ Butch Uka) 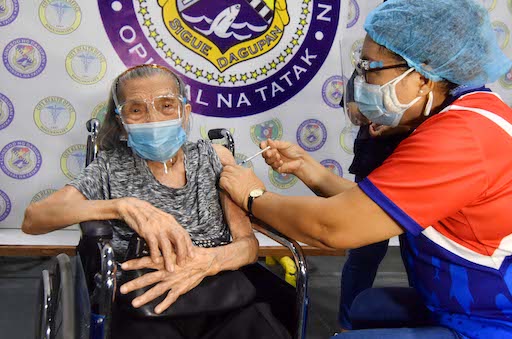 NEVER TOO OLD TO FIGHT COVID

NEVER TOO OLD TO FIGHT COVID