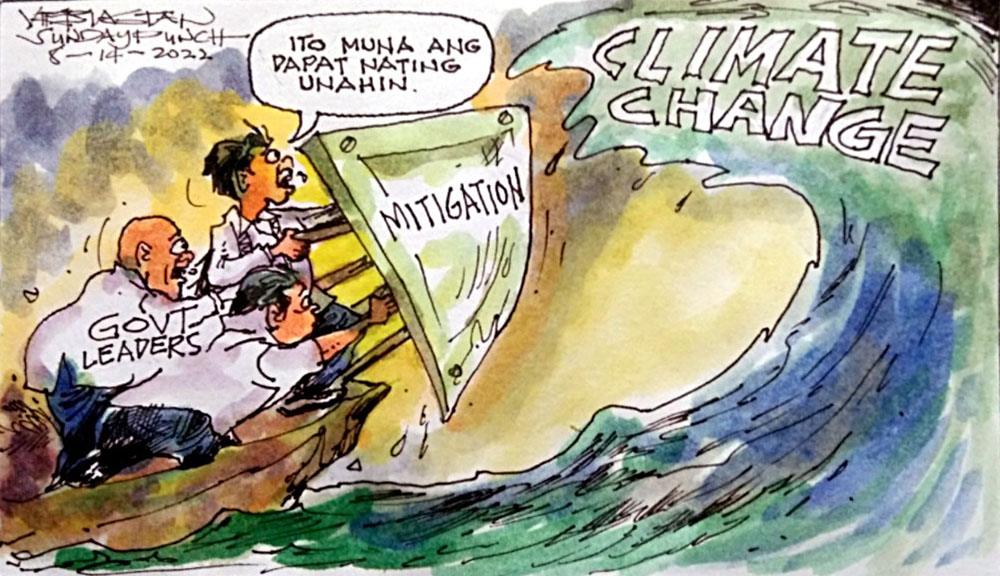 OVER the past months, many communities in low-lying areas in Pangasinan, particularly in Dagupan City, that were usually safe from flooding suddenly find themselves having to cope with knee-deep flooding during torrential rains aggravated by high tide.

These occurrences can no longer pooh-poohed as unusual and out of the ordinary as if these cannot happen regularly and within weeks. The fact is, these are occurring in such frequency that regular routines and lifestyles of communities are affected, prompting changes.

The buzz word is change. To be precise, it is climate change happening right in our own front yards. What used to be a boring topic reserved for discussions by first world countries is now a reality check that we must reckon with. We are already in the middle of long-term shifts in temperatures and weather patterns.

It has become imperative for our local governments to see through  these occurrences that will require changes in our priorities – safety and health needs. The earlier our elected leaders begin to confront the threats, the earlier and better resilient our communities can become.

The national government can continue to speak of dangers and warnings, but it is us in the countryside that must fend for ourselves. Woe to the town and city governments that will remain in denial about threats of climate change.

We are facing a natural crisis that’s irreversible and for the long term.

A BILL has been proposed allowing our 65 years old and above to continue working.   The present law retires government employees aged 65—except Supreme Court justices, which is 70.  Many private companies also retire their 65 and above personnel. Recent records show that 2.5 million senior citizens are still employed. That tells a lot.  Like, it means the 60 and above can still hack it.  In Japan alone, retirement is not compulsory.  In fact, the Japanese believe that the older you get, the more knowledgeable you become and, therefore, that makes you more productive.   The elderlies there are swiftly promoted that’s why septuagenarians and octogenarians usually become chairmen of the board of major global corporations like Toyota and Sony Corp.  Science tells us, too, that retirement is a primary cause of death because it encourages the brain to stop doing its normal prolific routine.

So, come on, pass that bill quickly.  And add more life to our seniors.