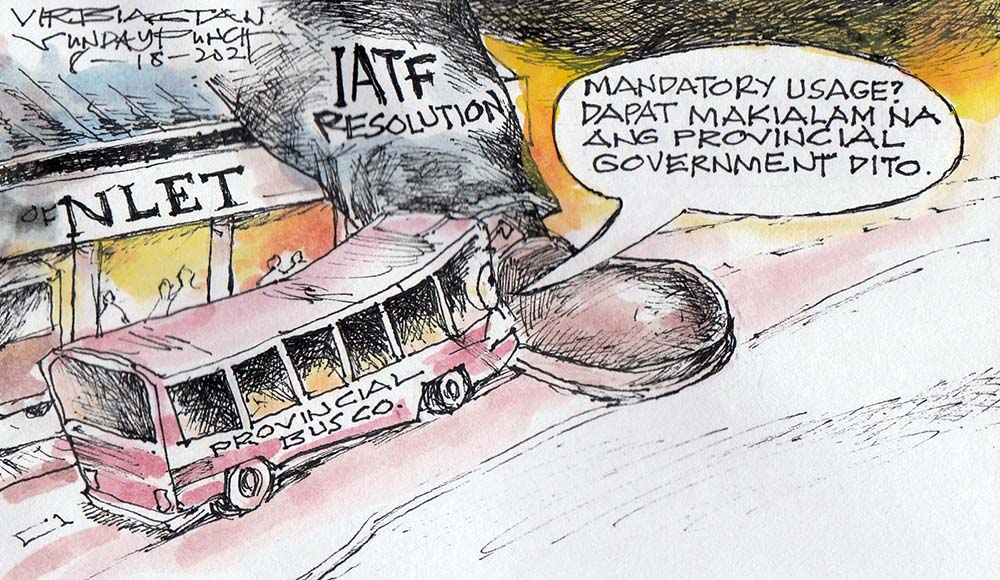 CAN a mere resolution of an ad hoc task force, specifically, the Inter-Agency Task Force for the Management of  Emerging Infectious Diseases, take precedence over, or override a regional trial court’s issued injunction?

While no one questions the IATF’s authority to impose restrictions that promote health and safety protocols to check the contagion of the COVID-19 pandemic, i.e., limiting bus -jeepney maximum capacity to 50%, installing plastic barriers between passengers, etc., the recent IATF Resolution 101-2021, clearly overstepped its mandate this time.  It cannot  compel bus companies to use ONLY the North Luzon Express Terminal (NLET) in Bocaue, Bulacan to board and disembark passengers going to and arriving from the north! It is discriminatory and against the law.

The NLET is a private enterprise. Not even a suggestion that the role of the NLET is crucial to the government’s effort to control the contagion of COVID-19 can provide the legal cover. It is likely that the DOTr-LTFRB also did not bother to impress upon the IATF council how IATF’s resolution will seriously impact on the lives of travelers whose health are being risked by requiring them to make an additional trip to reach their destinations because that would negate DOTr-LTFRB’s main argument. Of course, IATF couldn’t have possibly been told on how NLET will operate its business with the bus companies.

The implementation of the IATF resolution is the only remaining obstacle for the bus companies to resume operation and restore the same normalcy that people were used to before the pandemic.  It can be resolved amicably with the intervention of the provincial government and ask the IATF to recall the illegal resolution or the bus companies can raise the issue before the Supreme Court.

Obviously, the DOTr-LTFRB  in conspiracy with NLET owners, not only succeeded in their con act  vs the IATF, they also have the IATF to point to as the big bad wolf.

THE more President Duterte gets criticized for planning to run for vice president in May 2022, the more people sympathize with him.  This is a country of commiserations in case you have forgotten.  One screaming proof to this phenomenon is the latest Pulse Asia survey.  It showed Mr. Duterte leading in the vice presidential derby, incredibly, by a wide 18-10 margin over Senate President Tito Sotto.  What’s more, Mayor Sara of Davao City, Mr. Duterte’s daughter, also leads in the race for President—also by a yawning margin of 28-14 over Manila Mayor Isko Moreno, with Manny Pacquiao trailing 28-8.  That makes it a Duterte-Duterte tandem stunningly leading in the fight for next year’s presidential run.  It’s still a long 295 days to go to the May 9 polls.  But if the survey is any indication, the President’s awesome 91-percent trust rating is serving as sticky glue to his unflustered stay in power.  Surreal.