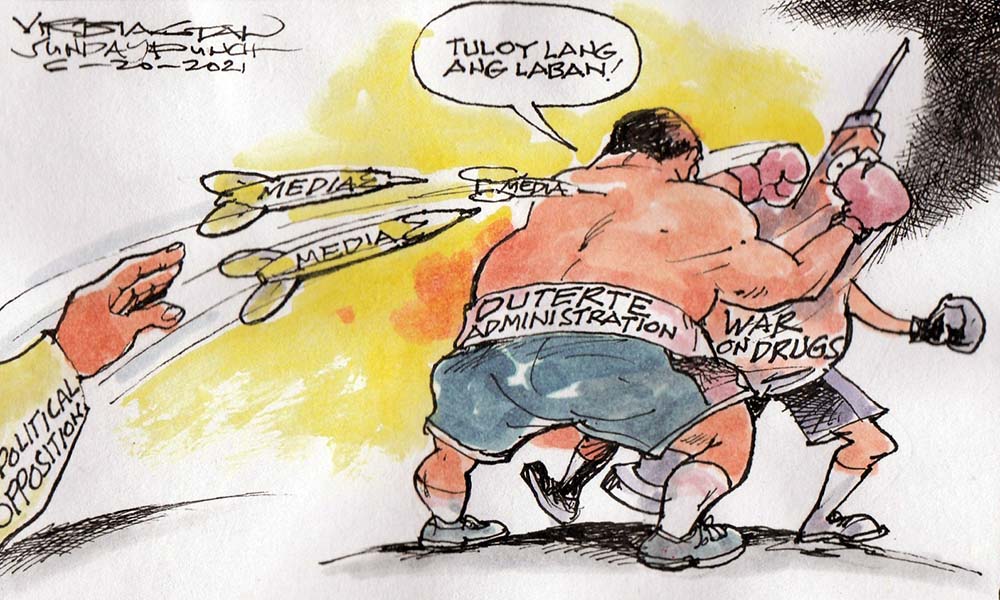 THE recent media offensive again launched by the political opposition using the war on drugs as a political issue to discredit the Duterte Administration is both detestable and deplorable.

We dare say “by the opposition” instead of the International Criminal Court’s retiring chief prosecutor who issued the statement that it is a “crime against humanity” because the latter has nothing but hearsay and, therefore, does not carry any weight in any legal forum. But for the opposition, it believes it provides the setting anew to further destabilize the government amid the pandemic. Speaking of political desperation and insensitivity.

Unfortunately for the opposition, the drug war being raised as a “crime against humanity” cannot ever earn any traction in the political milieu because the illegal drug trade was precisely what caused many Filipino families’ ties and bonds to be broken, destroyed many youths’ future.

It’s no secret that the illegal drug trade was protected by the narco-generals of the Aquino administration so the opposition has no moral ascendancy to decry this government’s efforts to protect the families against the drug syndicates.

If the opposition wants to redeem itself, the least it could do is to hold its tongue on the war on drugs and instead file criminal cases against law enforcers that clearly committed murders in the conduct of the drug war.

This renewed media offensive, discrediting the war on drugs simply to destabilize the government, will surely cost the opposition more than a million votes in 2022 from families protected by the drug war.

THE hot topic now is will President Duterte run for vice president in May 2022?  But even as he is undecided yet, his critics crazily say the President could not run for VP next year.  Baloney. The Constitution does not bar him from seeking the second highest position of the land.  What the Charter says is a president cannot seek reelection. Erap ran—and won—as Manila mayor after serving as president in 1998-2001. Gloria Arroyo ran—and won—for Pampanga representative after serving nine years as president in 2001-2010.   If Mr. Duterte runs for VP, we will know in October.  And if he does run, what’s wrong with that?  For one, he’ll not be breaking any law.  For another, that’ll mean democracy is at work. Remember:  freedom of choice is the cornerstone of democracy. But who is afraid of Mr. Duterte when he finally shoots for the VP post in 2022?  Only the insecure do.